I love the idea of an icy cold Coke. The commercials really do it for me; the way the liquid splashes into the glass and wraps around the ice cubes. There’s such satisfaction when the drinker quenches their thirst, relishing in the sweetness and smooth, delightfully fizzy taste of Coca Cola. And if they’re drinking from a glass bottle, then that just makes the scene look that much more perfect.

None of my friends that traveled with me in Italy were avidly interested in health (not that they were unhealthy people- they just weren’t consciously trying to be healthy most of the time, which is fine but its not how I am). Every day they wanted pastries and gelati and Coke or Peach Iced Tea, making it a little tricky for me to balance being healthy without being the constant odd one out. When we rented the peddle boat at the beach in Mondello, someone brought on cold Cokes in glass bottles. There was 5 of us altogether, but the boyfriend had explained discreetly to the person buying the Cokes that I don’t drink it so it was only necessary to buy 4. Regardless, when they cracked open the Cokes the idea of it intrigued me the way the commercials do, so I asked for a sip.

That’s all it took: one sip was too much for me. The same sweetness that I once lusted for now just felt as though it were rotting my teeth the second it passed by my lips.

A similar experience happened later on in the trip, when two of the guys I was traveling with finally ignored the protests of Liz and I (she was the only other female on the trip), and marched into McDonalds. As I sat on the hard chair and watched them eat their meals, all I felt was a strange fascination with how very precisely the real thing resembles the plastic versions of hamburgers. It’s eery, how identical each hamburger is to the next. But as a child, I remember always wanting to go to McDonalds.

So much of what we eat is psychological. As children, we see other kids having fun at McDonalds and assume that we’re supposed to want to go there (even if only for the toy that accompanies our processed “meal”). The same works for those Coke commercials: they become associated with a way to relieve thirst, when in reality we all know that chilled water would solve the problem much more efficiently.

I was interested to see the nutrition label stamped across the carton of a Big Mac at the McDonalds we went to in Florence. My friends looked surprised at the astronomical amounts of salt they had consumed in a few swift bites as well as the ridiculously high amount of calories. And all of this information was, of course, brightly colour coded in true McDonalds fashion to be as user-friendly as possible.

As with both of these occasions, I also recently discovered that I no longer enjoy movie theatre popcorn. While at the movies, I could smell the popcorn cooking and delighted in it, but then I began to think about the taste of it- just think about the taste, mind you, not even have any- and I realized that I really don’t care for the taste. It’s too salty, too overly-processed and stale, makes my mouth burn and my stomach hurt after I eat it. Movie theatres are officially safe places for me to go when it comes to not overloading on popcorn!

On the last train ride through Italy, one of the guys jokingly teased Liz that she was unhealthy because of her particular affection for Coke. And her cheerful response, which caused me no end of pondering and reflection, was, “I’m lazy, I’m not unhealthy!”

Anyone else find that a worthy statement to think about?

To give you a few more from the trip! 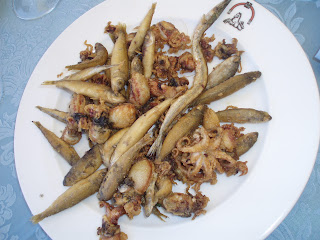 …and the meal that followed! 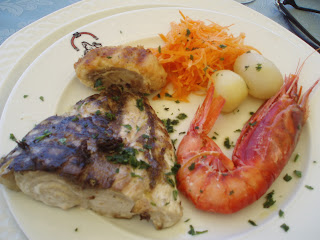 All the old stuff (by which I mean, magnificent historical works of architectural art) is really BIG. I didn’t think it was possible for me to look any smaller than I already am! 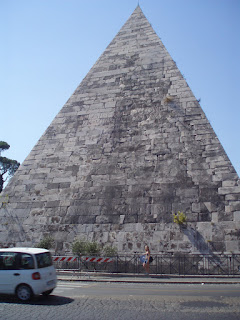 A fruit vendor at the end of our street in Palermo: 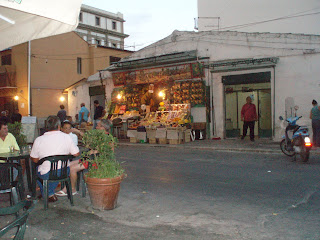 The ridiculous, ridiculous plate of 4-cheese gnocchi in walnut cream sauce. Basically it was like eating a plate of cheese balls. About 3 of these would have been a sufficient side dish, and as you can imagine I was only able to eat about half of the plate before I felt like a cheeseball myself. Gotta love the Italians for their pasta! 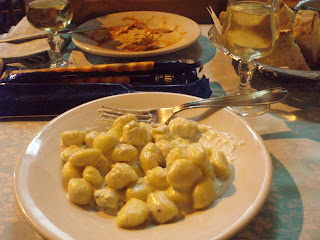 Ironically enough, even though I filled up on all these creamy dishes, I lost 2 lbs during my holiday. This confuses me and I’m hoping someone can have an explanation for it. I really don’t understand it. Is it muscle that I lost because I haven’t been doing strength training? Because I don’t think that the amount of walking I did increased that dramatically from usual, and I think I was eating about the same amount as I normally do. Very curious indeed. The same thing happened when I lived in Spain last summer; I ended up somehow losing weight while I was away from home. Clearly, the key to weight loss is going traveling somewhere fantastic like Europe:)